PIC BY GEOFF ROBINSON PHOTOGRAPHY 07976 880732...PIC SHOWS THE WORLDS BIGGEST SUPER YACHT CALLED ECLIPSE OWNED BY ROMAN ABRAMOVICH HAVING A RE FIT IN BARCELONA,SPAIN,ON MAY 17TH 2012.THE YACHT IS COVERED IN TURPAULIN TO STOP PEOPLE SEEING WHAT WORK IS GOING ON...Chelsea FC owner Roman Abramovich who owns the world?s largest private superyacht is having it re-fitted after just TWO years.When the Russian tycoon bought the 557ft-long yacht, Eclipse, in 2010 it beat the 532-foot yacht Dubai, owned by ruler of Dubai Sheikh Mohammed bin Rashid al-Maktoum, to become the biggest in the world..But amid rumours Sheikh Mohammed is having his yacht extended by as much as eight feet to recapture the title, Mr Ambramovich has now booked his boat in for a re-fit in Barcelona harbour..The mega-yacht is currently moored in the harbour, where it is covered in tarpaulin and scaffolding while the secret work is carried out by Marina Barcelona 92..It is not known exactly what alterations are being done to the yacht, which Mr Abramavich, who will be in Germany tonight (Sat) for the Euro Cup final, initially bought for around £330 million..SEE COPY CATCHLINE Abramovich yacht re-fit.. 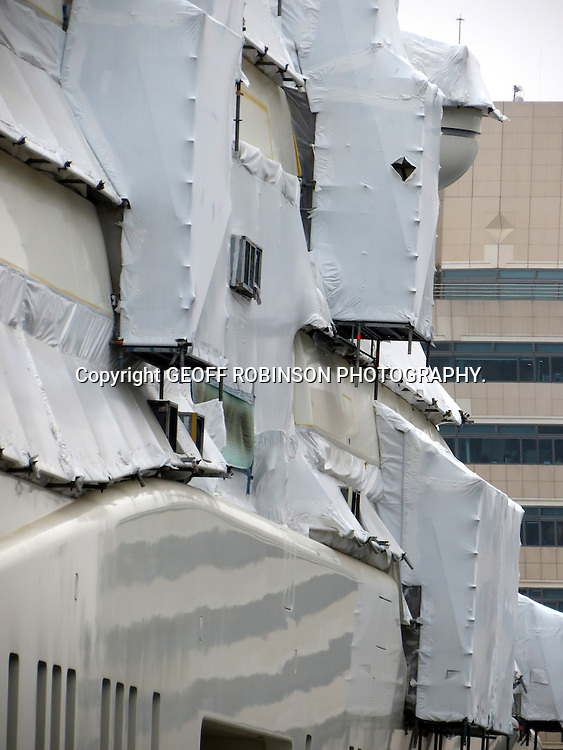